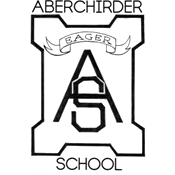 One of our parents Zandra Stuart entered a competition in the Daily Record which was won by Loganair for someone to have a tartan designed and woven.  Zandra suggested that Aberchirder School  could have a tartan designed as it was the school’s 50th birthday and also Loganairs  50th birthday.  Katrine Tweedie rang the school to tell us that Zandra had won and asked us to pass on the good news to her… she was delighted.   The wheels were then set in motion and each child in the school designed a tartan and one winner from each class was chosen by Aberchirder School Parent Council members.  The 7 winning class designs were then sent to Loganair and an overall winner was chosen.  Luke Reglinski a P3 pupil at the time had the winning design and the Daily Record  paid for Luke, his mum Suzanne, Zandra Stuart and the class teacher at the time Miss Ballantyne to travel by train to Edinburgh to see Luke’s tartan being woven at the weaving mill.  The tartan then had to be named and entered into the official tartan register.  The tartan is officially known as Aberchirder Primary School Tartan and is number 12060. A grant of  £2500 was then applied for from Aberchirder Community Association and we were successful in securing this which allowed for the purchase of a 40m of tartan and a tie to be made for each pupil and member of staff in school.  Our school administrator Coleen Reid contacted Moira George at Soy Kilts who arranged for the tartan to be woven and sent to her.  Moira also arranged for the manufacture of the ties which the pupils are seen to be wearing in the photo. Patricia Thistle from Loganair also came to the school to present Luke with an model aeroplane which had  been engraved with his name on it and incorporated the school tartan on the wings.

A huge thank you to the Aberchirder Community Association for the grant, to Moira at Soy Kilts and especially to Zandra Stuart who entered the competition in the first place.  We are very proud to have a tartan of our very own and in days to come there will be more items made from the tartan available to purchase from the school.  Adult and children ties are available to purchase at present.